What could be better than minding a cozy store for part of an afternoon, especially when the store is owned by Dear Ones and contains a wealth of used books?  After selling a few of them—okay, they sold themselves and I managed to tally them and figure out the sales tax—I undertook a leisurely tour of the shelves.  Many a weighty title called me, something I ‘ought’ to read.  But I settled in the youth section. I read two chapters of Nancy Drew and the Hidden Staircase, staple of my girlhood.  Then, one more attempt at Harry Potter.  I tried. I really tried.  Finally I wandered to a shelf of miscellany and drew forth a delightful collection of quotes called Poisonous Barbs.  I was happily engrossed in that when one of the shop’s owners returned.

Poisonous Barbs.  One man’s meat is another man’s poison, so they say.  My patio contains a heartbreaker, a specimen-vine called Gloriosa superba. 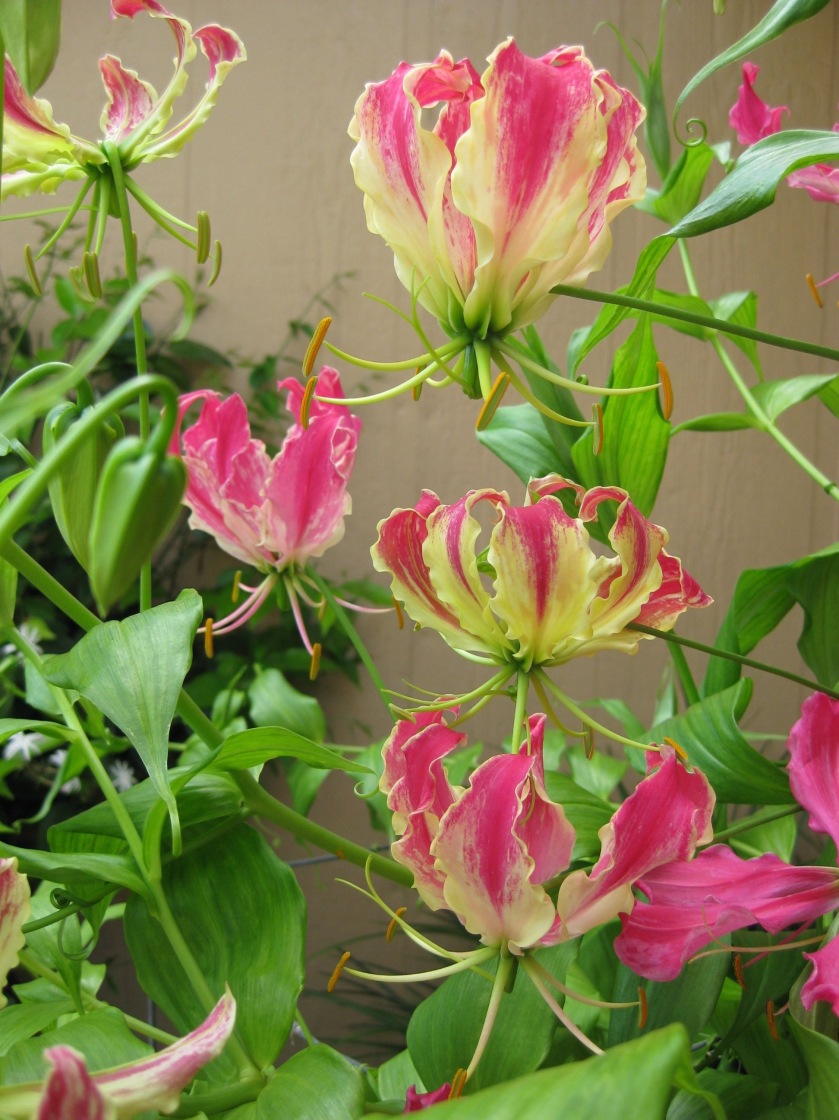 I love its beauty, the whirly tips of its leaves.  Best of all, it was a gift from my ‘ishah chayil / woman of valor Janice Vaughn, of blessed memory.

On the other hand, the whole plant is poisonous (as are many ornamentals.)  Especially the brown tubers underground, from which it grows. Many there are in Gloriosa’s native land who should have been more careful about the crunchy element in their salad. Just saying.

This dangerous beauty is situated just past the glass through which I view the patio and back yard from my elliptical.  I enjoy the dark humor of the occasions when a hummingbird zooms up to a Gloriosa bloom, then swerves sharply away. How does it know?

Dear Quote Investigator: There is a famous anecdote in which an exasperated individual fantasizes aloud about giving poison to another person. The sharp rejoinder is surprising and hilarious. Usually the two named participants are Nancy Astor and Winston Churchill. Are you familiar with this story? Would you please explore this topic?

Quote Investigator: The earliest evidence known to QI of a strongly matching jest was published in November 1899. The excerpt below from an Oswego, New York newspaper acknowledged a source called the “Listener”. Neither participant was identified. Boldface has been added to excerpts: 1

The “Listener” reports the following from the subway: On one of the recent warm days a sour-visaged, fussy lady got on one of the smoking seats on an open car in the subway.

Next her sat a man who was smoking a cigar. More than that, the lady, sniffing, easily made out that the man had been eating onions. Still more than that, she had the strongest kind of suspicion that he had been drinking beer. The lady fussed and wriggled, and grew angrier, and looked at the man scornfully. Presently she could endure it no longer. She looked squarely at him and said:

“If you were my husband, sir, I’d give you a dose of poison!”

The popular story above was reprinted with minor alterations in multiple newspapers in the following days, months, and years. An early instance in the “New York Tribune” acknowledged “The Boston Transcript”. 2 3 Top researcher Barry Popik identified this primordial version of the repartee and located other valuable citations. 4

This joke has been evolving for more than one hundred years.