Cacaphony this early morning.  Hullabaloo. I’m talking about the neighborhood watch known as blue jays, who have their own technique for spreading bad news: raucous screaming.

In the midst of my human fears, stirred as they are by relentless reports of violence, ignorance, accusations, injustices of every stripe, including starved whale-stomachs full of plastic detritus, I am now privileged to worry what heinous thing is loose in my own neighborhood.  Snake? Hawk? Prowling cat?  Whatever it is, the screaming cannot be ignored.

Conditions must be good for blue jays this year.  Hosts of trainees, wings all a-quiver, begging to be fed.  Unlike the solitary ways of some of my songbirds, blue jay parents and trainees swoop about in squadrons.  Life for them seems to be all about community.  And sure they shout and jostle.  But not with this level of sustained squalling.

I went to the sun porch window, little hoping for an explanation.  But there it was, right in front of my eyes.  At first I thought the form in the hedgerow was a fledgling. But it was awfully still for a fledgling.  So I went out to see.  Sadly, it was an adult jay, deceased.  The moment I crossed an invisible line, there rang out a sharp challenge from the dense crape myrtle foliage directly above my head. I cannot emphasize enough my admiration for the combination of emotion and menace and forbearance, all wrapped up in one piercing syllable:  “Jay.”

I told the invisible sentinel that I was very sorry for what happened to his comrade.  Then I backed carefully away.

Later I saw another jay wing down to the corpse, and stand very still for a moment.  Paying homage.

Still later I crept out (with a hat on my head).  There was agitation in the foliage.   But I  was allowed to come close, and take this image: 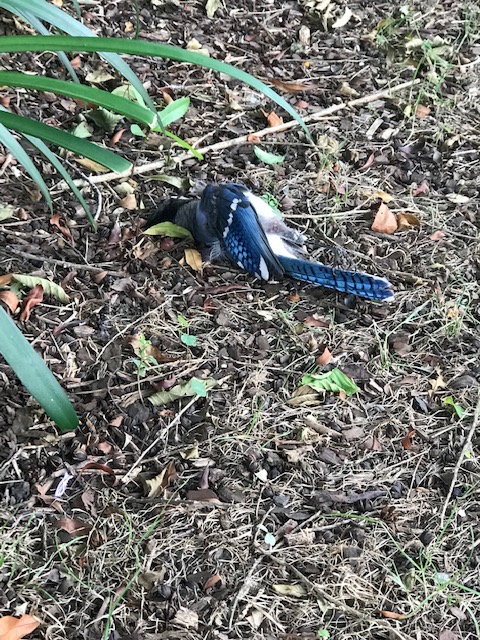 4 thoughts on “Raising the Alarm”