I spied her on the patio at twilight, standing on the brick edge of the fountain, hands on the edge of the jar, having a nice drink. 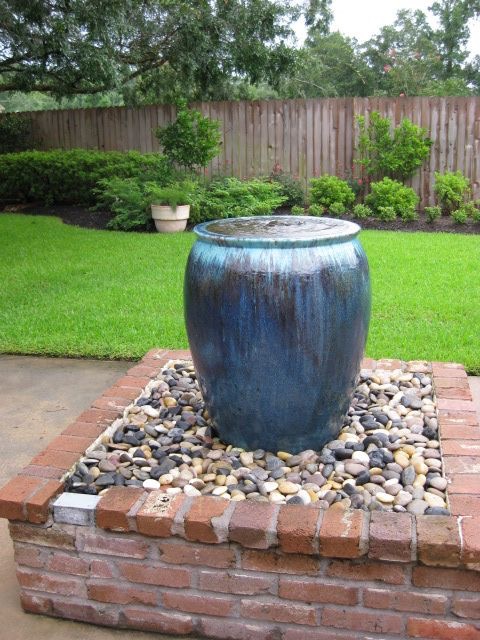 In that moment my long afternoon at the computer dropped away. Perhaps this creature with her guard down was my reward, my breathing space for deadlines met and then some?

She dropped to the pavement, ambled over to the birdbath. She leapt nimbly up, rocking the concrete bowl a bit with her weight, recovering, steadying herself to stand astraddle. She took another long-ish drink.

Then she hopped down as if to head back to her private queendom.  But then she saw me looking at her.  I thought she would run.  But she locked eyes, then to my surprise meandered over to the foot of the glass door, where she stood looking up at me.

What magic is this? I dropped to the doormat and there we were, eye to eye.

Here’s what I saw, and it won’t take you long to guess.  A “short and wide facial region” fronting a “voluminous brain case.”  A pointed snout, with black nose aquiver at my proximity. Curious, intelligent black eyes, which never once dropped my gaze.  Gray fur. Slender black forepaws.  And – surely you know her by now! – an adorable black mask.

So I’m entranced, absorbed in her bright eyes and her quivering nose and her delicate hands. I’m calling this little trickster my darling, my sweetheart (I call green lizards that, too!)  And my husband is freaking out.   Well knowing her tribe’s propensity for unruly behavior, not to mention destruction, he wants me to come away from the glass. But he settles for my promise not to open the door.

After a time of inter-species gazing, delicious to me and of unknown significance to her, she remembers her to-list.  She strolls to the grass under the birdfeeder, where she checks for seeds, just in case the cardinal family has left any.  Then she saunters over to the grass under the Chinese elm, where she roots around a while for who knows what.  Then she mosies out of my sight.

Did you know raccoons are smarter than cats and only slightly less smart than monkeys?  Would you be surprised to hear they can “use situations to advance their intelligence”?

I’ve heard tell of a domesticated raccoon named Melanie who allegedly can ride a bike, clap, dance, and ring a bell.  Hmmm.

Raccoons are curious, tidy (when not wreaking havoc), and enterprising. They’re determined, playful, and they like to rearrange, knock things off balance even, just to see what they can get away with. The mask and the prison-stripe tail might be your clue that they’re resourceful thieves.

As to their thievery, in my research I found this gem of a quote:

I’m happy to play along with you, little trickster friend, my adored and now-named Queen of Sheba!  But please don’t shred my fence or strew my garbage.  Just saying.