At twenty months my granddaughter has not been still for a long time.  But today she was recovering from a tummy bug, not up to full speed.  After we had drooped around the house a bit, doing next to nothing, I decided we needed some fresh air.  We sat a spell on the front porch, as in days of yore. This time, though, rather than perch upon my knee she chose a low chair close to the bench where I sat.  Ah, she’s growing up!  She examined the dirt on the bottom of her feet.  She twirled a yellow leaf from a gum ball tree.  Then she came and sat by me on the bench.  Again, a whole lot of companionable nothing.  Time passed. A dark swallowtail butterfly fluttered by.  She said, “Hi.”  After a pause, she aimed an air kiss at where it had been.

A fish crow called its group together with a doubled-up nasally caw.  I said, “That right there is the voice of a fish crow.”  She solemnly repeated, “fish crow.”  We practiced the nasally caw. We watched the congregation wing by.

Then, high above, I heard the wondrous sound of  Mississippi kites.  I could just make out the two of them, pinpoints swooping in front of a brilliant white  cloud. 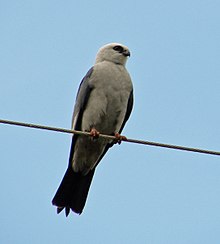 I explained to Amelia that although the high pitched call of a kite is something like a broad winged hawk’s, the two birds of prey are nothing alike. The kite is small, dashing, elegant.  The hawk is bigger, darker, stockier. The kite catches insects, such as grasshoppers.  The hawk catches small creatures such as mice.  She registered this in silence, then got down and sat on the doormat with her back against the front door.  So we went inside.