To descend from a superior rank, dignity, or status.

To fly or dive down swiftly, usually to attack prey. 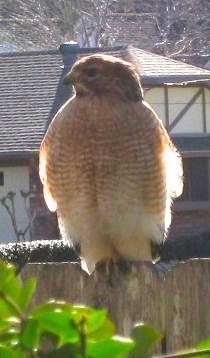 Yesterday morning found me on the patio, reading the Beaumont Enterprise, accounts of catastrophic deluge and small steps toward recovery. The various articles were like the facets of a prism.  I turned the spectrum of emotions this way and that.

Then there intruded the scream of a red-shouldered hawk. Really?? I’m not so easily taken in as all that.  I was pretty sure it was a blue jay, practicing his mimicry, trying to scare the other songbirds away so he could visit the birdfeeder in peace.

But then I heard two screams – one close, one answering from a distance. Unless a blue jay can split his voice and throw it high in the sky, these really were hawks.

Either he fell upon a tasty treat, or hurt himself, for he began to scream from the ground, other side of a fence and a house from me.  I hope he was screaming to his mate: “Lunch is served.”

I went on with my day, which as days will, filled with many things.

This morning came a chorus of reminders.  Two wrens caroling. One cardinal chirping. One chickadee buzzing. One redbellied woodpecker chirring.  Facets of a prism, pouring out color, converging to say, “Remember what you saw?”

I had almost forgotten.   But, now that you mention it!

Here’s something I drew a long time ago:

Last night I went to Liberty to hear a lady from the Houston Audubon Society talk about bird migration.  Which she did, with many  slides, in the dark. It was very interesting.  But my eyes were heavy.

When she finished her talk she called for lights.  And then, behold, she lifted a covered birdcage from the floor and set in on a table.  From the birdcage she drew forth a beautiful Purple Martin, name of Emilio.  Seems Emilio smacked into a window as a youth and sustained brain damage.  He can’t see, he can’t feed himself.  But he can sing, like an angel.

After telling his story and giving us time to admire him, she put darling Emilio away and lifted a large box to the table.  From this box she drew forth…a swallow-tailed kite.  This creature had fallen from her nest as a baby, mangling herself, but surviving.  She’s grown now. One wing is useless, she hasn’t got much of a swallow tail, she has zero coordination.  But oh that sleek, noble, beautiful white head!  Those fierce orange eyes! I was pleased to hear she shares quarters with a rescued Mississippi kite.  An interspecies friendship.

After her story was fully told, back she went into her box.  Another box even larger was hoisted to the tabletop.  There was a great commotion going on inside it.  The bird lady said it was this bird’s first time to be shown in public, and it could be a disaster, but she’d had a chat with the bird about proper behavior, so they were going to try it.  Quoth the audience, “What kind of bird is it?”  She wouldn’t tell.  She opened the door of the box, struggled mightily with the creature, and brought forth … a turkey vulture.  This we were not expecting!

This two-year-old young lady had a close encounter with a car in west Texas, necessitating partial amputations. So, like the other two birds, she can never live on her own.  Instead she gets mice and rats without having to work for them, and lots of human attention — a burden she must bear.
The bird lady pointed out her huge nostrils.  Turkey vultures have a keen sense of smell.  Black vultures, not being quite as blessed, follow them around.
One thing that surprised me was the color of her feathers.  I had pictured  a rusty musty black.  Not at all.  She’s a dense sooty black, a look that suits her.
Another surprise:  vultures have long been considered raptors.  But now we’re thinking they’re more closely related to storks.
Hmmm.  The stork bringeth, the stork taketh away?
The bird lady had withheld her food all day, because a turkey vulture’s inclination when overburdened by life is to throw up.  Sure enough, when the bird lady went to stuff her back in her cage, the bird tried to throw up on her.  But it was only a dry heave. I admire the spirit of both ladies.
To have a vulture in the room was strange.  You could see her intelligence.  And her keen appraisal of us, turning her eyes from one face to another.  I tried to look as alive as I could!

So I’m at my computer, putting together a prayer guide for the month of October.  I had just put the finishing touches on Day 1:

The Christian church continues to observe the season we call Ordinary Time, which runs this year from Pentecost Sunday to the first Sunday of Advent. We call this season ‘ordinary’ not because it’s common but because it’s ordered and numbered, as in mile markers on a journey. How wonderful that each new day offers an on-ramp to heaven!

I was viewing this with some satisfaction, with little expectation of affirmation beyond that, when down swooped an angel.  He perched on the back of a patio chair, just beyond my window.  Here he is:

A poor image, I realize, but it’s a wonder my thunderstruck self was able to operate a camera at all!  He stood there a while, surveying the patio, the spring-loaded chair trembling under the weight of him.  He turn his back, he ruffled his gorgeous feathers:

He stretched his magnificent wingspan, turning this way and that.  Then he winged over to the fountain, where he had a refreshing sip of water before departing.

Broad-wing? Red-shouldered?  I was too rattled for close observation.  But he gave me just enough of his time.  That’s often how it is with angels.

I offer you what I beheld through the screen. Tis all I can do!