The lesson I presented yesterday to my adult Sunday school class was an exploration of Proverbs 31:10-31. I titled it “’Ishah Chayil, Woman of Valor.” I used a very old translation—Douay-Rheims, a translation written in exile by English Catholic scholars, during the Protestant Reformation.  Curiously, the Catholic Douay-Rheims influenced the later writing of the Protestant King James Version!  The language of 1610 (revised 1750) I find musical, and refreshing in its way.  But puzzling in places. I added bracketed explanations of some of the words:

Who shall find a valiant woman? Far and from the uttermost coasts is the price of her. The heart of her husband trusteth in her, and he shall have no need of spoils [he will not lack material goods.] She will render him good, and not evil, all the days of her life.  She hath sought wool and flax, and hath wrought by the counsel of her hands.  She is like the merchant’s ship, she bringeth her bread from afar.  And she hath risen in the night, and given a prey [food] to her household, and victuals [food] to her maidens.  She hath considered a field, and bought it: with the fruit of her hands she hath planted a vineyard.  She hath girded her loins with strength, and hath strengthened her arm.  She hath tasted and seen that her traffic [work] is good: her lamp shall not be put out at night.  She hath put out her hand to strong things, and her fingers have taken hold of the spindle.  She hath opened her hand to the needy, and stretched out her hands to the poor.  She shall not fear for her house in the cold of snow: for all her domestics are clothed with double garments.  She hath made herself clothing of tapestry: fine linen and purple is her covering.  Her husband is honorable in the gates, when he sitteth among the senators of the land. She made fine linen, and sold it, and delivered a girdle [decorative belt] to the Chanaanite [merchant]. Strength and beauty are her clothing, and she shall laugh in the latter day.  She hath opened her mouth to wisdom, and the law of clemency [forbearance, mercy] is on her tongue.  She hath looked well to the paths of her house, and hath not eaten her bread idle.  Her children rose up, and called her blessed: her husband, and he praised her.  Many daughters have gathered together riches: thou hast surpassed them all.  Favour is deceitful, and beauty is vain: the woman that feareth the Lord, she shall be praised.  Give her of the fruit of her hands: and let her works praise her in the gates.

One interesting thing I found in researching this text:

Traditionally, in Judaism, this entire passage is recited in Hebrew by the husband at the Friday evening meal.  After the Shabbat candles are lit but before the meal is eaten, the wife is praised by the reading of this text, and then the children are blessed.

My class was very much intrigued by this concept! Male and female alike.  Though the men did look a little startled at first…

I took pains to point out that this ancient poem was never intended to be used prescriptively, as a to-do list for women. I don’t think it was, anyway.  A woman whose website I visited put it something like this:  The poem was intended to highlight the glory of everyday. It was intended to be a celebration of what we’ve accomplished by our energy and creativity, whatever that may be. To celebrate the daily acts of valor in each other’s lives. So, for every woman—married or single, mother or not:

Your life is worthy of poetry.

In the picture below you will see an ‘ishah chayil’ who played an important part in my life.  The year was 2009, I think.  We were at her farm in Kansas, and she was giving me prey (pheasant shot by her husband) and other delicious victuals, such as ham, rice, spiced fruit…  She also gave me a cake, as it was my birthday.  A charming, creative, generous woman of valor she was.  Her birth-month is October, so let today’s post serve as an early birthday card. 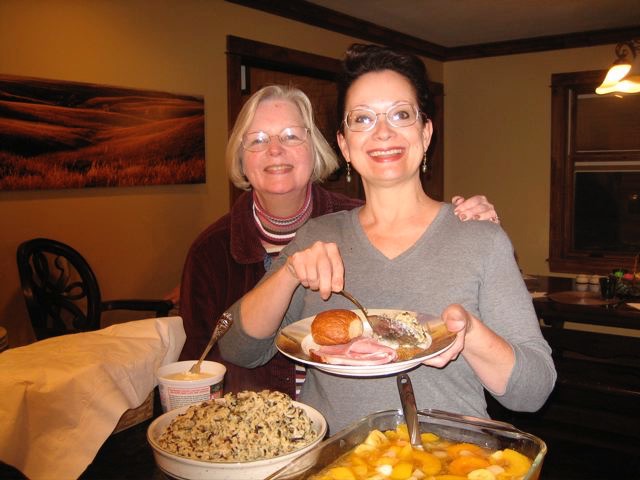